Got Water? How ’bout Salt?

On the web page of The Journal of Clinical Investigation it explains the effects of sodium concentration and osmolality on water and electrolyte absorption. It states that the absorption of water was absent with low sodium levels and greatly increased with increased NaCl. It further explains that the movement of water cannot be explained merely by osmotic movement but that it must be due to the electrical potential as well as the changes occurring because of the reabsorptive process. 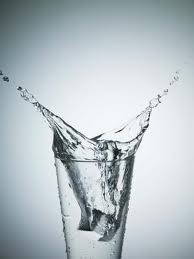 The article was difficult for me to read and understand. So, I spent a lot of time reading and reading again. I understand that Urea is a byproduct of the liver metabolizing proteins. Urea is obviously a waste product and the body needs to dispose of it. The liver also produces bile digestive juice and stores it in the gallbladder. The bile dissolves fat in the intestine where it is to be digested by enzymes from the pancreas and along the intestine walls. Now, what was difficult to ascertain because of the higher level physiological vernacular is that water, by the time it reaches the intestines, consists of the water-soluble vitamins, and specifically this water contains dissolved salt. The salt in the water (in the intestines) comes from the food and liquid you swallow, as well as the digestive juices secreted by the many digestive glands.

In other words the study concludes, distilled water, or water without electrolytes isn’t going to be absorbed by the body.

“Effects of Sodium Concentration and Osmolality on Water and Electrolyte Absorption from the Intact Human Colon.” Web. 28 Jan. 2011. .

Diet, Digestion, Exercise, How Do I?, Nutrition, Recovery, Sports